Originally released in 2002, the MicroKorg from Korg is an extremely popular virtual analog synthesizer and vocoder module. 128 user-rewritable presets (arranged by genre) give you an idea of what is possible here, while a pair of DCOs and an 8-voice vocoder can also produce a wide array of sounds from scratch.

The first digitally-controlled oscillator alone, for example, can be set to one of 71 waveforms; 64 coming from Korg’s DW-8000 synth and the remaining seven being more typical analog waveform types like sawtooth, triangle, square, sine, noise, and more. A second oscillator is limited to just triangle, sawtooth, and square waves. You can even create your own formant waveforms using the included microphone.

Six AA batteries make it possible to use the MicroKorg on the go, or users can opt for the 9V DC adapter. The simplified user interface includes two ‘Edit Select’ knobs that allow for a simplified front panel that doesn’t suffer from lack of tweaking capabilities despite it’s clean and uncluttered look. MIDI In, Out, and Thru jacks all sit on the back panel along with ¼” audio connections.

Today, the MicroKorg has become a very popular virtual analog synthesizer. It’s wide range of capabilities coupled with its portable frame and low price point make it a good choice for any producer seeking a powerful workhorse of a synthesizer at a value price. 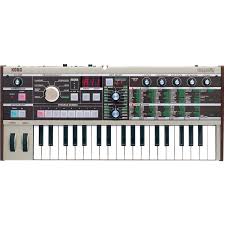