The SH-101 from Roland is a monophonic bass synthesizer with a single oscillator first produced in 1982. While in production for four years, the unit found little initial commercial success. However, time has been kind to the SH-101, and today it is regarded as one of the quintessential bass mono synths for electronic music production, largely thanks to it being used heavily in the house music explosion of the early 1990s.

This 32 key synthesizer features gratuitous use of sliders to control the sounds, which must all be programmed manually as it has no patch memory. A mixer section blends varying levels of square/pulse waves, sawtooth waves, white noise and a sub oscillator (1 or 2 octaves below). ADSR sliders modulate the filter and VCA sections, and the LFO can modulate the pitch, pulsewidth, filter cutoff, or VCA.

Since the SH-101 has no MIDI (without modifications), the 100 step sequencer and arpeggiator see heavy use. Portamento controls sit adjacent to pitch and mod wheels. The SH-101 can be powered by AC adapter or six UM2 batteries (as it was originally intended to be used with an optional keytar attachment).

The SH-101 has been recreated digitally as the SH-01A in Roland’s affordable boutique lineup and also as several plugin emulations, including the TAL Bassline 101. 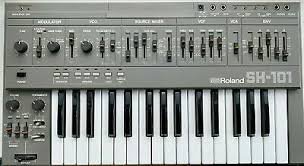