The Micron from Alesis was released in 2004 as a follow-up to their Ion virtual analog synthesizer. The Ion was the first synthesizer from Alesis to use DSP to simulate analog components and sound, and while it offered plenty of knobs and sliders to dial up a patch, the Micron has only three knobs, two sliders, a handful of buttons, and a small digital readout. While it is possible to edit sounds on the device, the workflow is clunky and awkward. Most owners use software editors to sculpt their sounds or simply scroll presets. The Micron comes with about 600 presets and has memory to hold around 1000 total, and many preset packs exist online.

In addition to the continuously variable virtual analog waveforms, the Micron has frequency modulating and sync oscillator capabilities. The two multimode filters can be switched into 20 different modes, which are modeled from classic units like the Minimoog and Roland’s 303. Onboard effects include an overdrive that can be assigned to each individual voice, reverb, and delay. A sequencer and rhythm programmer are also included.

MIDI in, out, and thru jacks sit on the back panel along with ¼” audio connections and a jack for the 9 Volt AC power supply. A 37 key keyboard comes with the Micron too, although it lacks aftertouch. Many users adore the Micron for its vintage sound, thick basses, and fun red metal and plastic casing. The synth is small enough to be fairly portable and affordable enough to find a home even in a budget studio setup. 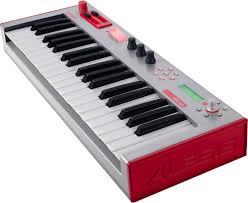