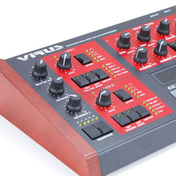 Synth: Virus A Virus B

Files:
VirusDec99PN.MID - patches dumped as a MIDI file
dec99pn.syx - a raw sysex dump of them
Work2Dec99.AVR - the patches in Cubase's Studio Module format.
Work3Dec99.AVR - a revised bank which improves on some of the patches already included (and makes them more generic). This is copied into files named revised2.mid and revised2.syx and I think these are worthwhile enhancements.

Please note that the Studio Module driver appears to do strange things with Virus Patch names. Basically if you attempt to rename patches in Cubase, only the first character is changed. I think this is because of a dump format difference between the old and new Virus or maybe I have an old driver. Or something. Either way, I named these patches on the Virus itself which may explain why some of them are a little unambitious.

Patches:
These are a lot of my typical Virus noises. Usually there's too much delay used (subtlety isn't my strongest point) or the sound may really work only in the context of some heavy "performance-tweaking" but hey - they're free! Some of the sounds are designed for generic use though - e.g. the "Model D", "Rondy Voo" and some of the basses, sequencer patches and sound effects. Many use features of version 3.0 of the Virus. For quality sounds, talk to someone like Rob Papen - he's an expert!

For these, all I ask is a credit on any CD release that uses them - although I'm not fanatical about that either if you're stingy with your credits ;-)

Advert: If you really like some of them, or are feeling generally well-disposed towards me, you might want to hear some of my Virus sounds in context. You could do this by ordering my CD "Lore" from http://www.neuharm.demon.co.uk - OK, I'm forgiven a little plug (I hope). Even with free sounds there's an ulterior motive!