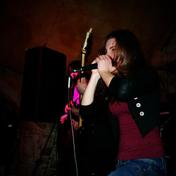 Until now, all of our sample libraries were made because we wanted to use them for something. This one, though, we made out of a mixture of curiosity and inability to resist a challenge.

So, just what are these 272 orks, and why are they so merry? Well, they're 272 samples of a female death metal vocalist, and they're merry because this was a lot of fun to make and play with. You get all vowels, consonants and dipthongs used in the English language, with the vowels and dipthongs having three round robins and the consonants four. There are also nine miscellaneous growls like "yeah" or "hey" with three round robins, numbers from zero through ten, and eight breaths. Finally there's a selection of 70 pre-drop samples ranging from the basic ("one two three go") to the classic ("back with the heavyweight jam") and the absurd ("who would want to get robots high"). All are 44.1 kHz 24-bit wav files and add up to 43 MB total, with a 38 MB compressed download size. We're going to follow this up with a voice bank for Alter/Ego.

We don't know what uses you all will find for these, but included three SFZ mappings for various potential uses - one for assembling death metal vocals, one with all the pre-drop samples, and one for monster voice sound design. So, have fun. We did.

The first demo is a small bit of death metal (using our own Emilyguitar and Growlybass also) with one of the pre-drop samples placed over it, then the same phrase assembled from the phoneme samples.

The second demo is two instances of the monster dialogue mapping. One is run through RoVee, which is generally a very fun effect to use with this library, with the pitch shifted down and the formants shifted up. Then we just mashed on MIDI keys semi-randomly, added some pitch bend wheel, added reverb, and here you are - two goblins arguing in a cave.

And a short video showing how a line of vocals can be assembled from these, plus some fun with effects.

[Couldn't fetch content for https://www.youtube.com/watch?v=ylDccvJx3eU - Is the URL correct?]

This library is a free download, open source and royalty-free for all commercial and non-commercial use.

This is so unusual, so original and so much fun I HAD to have it. Thanks