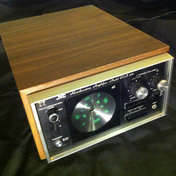 I’ve created impulse responses for 2 older, obscure spring reverbs: The JVC Reverberation ECA-102, and the Pioneer SR-202W. Thanks to Studio Phasen for letting me borrow these.

For the JVC, I was able to captured several IR’s at various degrees of intensity, although the character of the sound didn’t to change too much.

Also, for both units, I could never get a fully wet signal, as some of the original signal would always bleed through. To compensate for this, I’ve created an alternate set of modified IR files which remove the dry signal bleed as much as possible. You can find these in the ‘modified’ folders.

Both of these reverbs produce a very lo-fi effect reminiscent of classic sci-fi film effects. Editing the decay, size, gain, and other settings in the convolution reverb pro can yield some pretty interesting results.