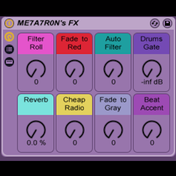 Originally posted on my blog at: http://me7a7r0n.tumblr.com/

Super simple 8 knob rack designed for use on all tracks. I'll go through all the knobs and give a brief explanation of how they work and what they do.

We start out with the “Filter Roll" Its pretty much what you think. It grabs a chunk of the audio and repeats it. Increasing in intervals and quantization as you turn it until it reaches a roll. Great for drum tracks to create fills and rolls or just glitching up any audio. Try turning it on and off in quick succession to get a funky glitch effect on Leads and Bass.

Next we have the “Fade to Red" effect. This should be familiar to some of you, I "borrowed" this effect from Will Marshall. (All credit to him and its creators) This is a fun effect that has a lot going on. Essentially its a building 8 bit crusher with some reverb, ping pong delay and an EQ8 that cuts out a lot of the frequency as you turn the knob. This is a great effect for fading out tracks in an interesting spacey LoFi way. Its great when combined with a few other effects.

The “Auto Filter" is your classic hi pass filter for all your DJing needs. I designed this to be a super simple 1 knob does it all filter. As you turn it the filter increases to cut out the hi frequencies and will almost mute the track entirely when turned all the way, leaving only the low end. Great for filter sweeps and that classic "under water" sound.

Next is one of my favorites and its the only effect that will require some extra steps on your end to get it working. It’s the “Drums Gate" and is exactly what it says it is. You’ll need to open the Rack up and select the "Drums Gate" rack from inside and expand it. When you do you should see something like this, image

Then go into the “Gate” and under “Sidechain” select the “Audio From” drop down menu and select whatever track you have your drums on. I’m assuming that you have your drums on its own separate track. Once you’ve selected the sidechain host the effect should be working. You’ll need to make sure you have drums playing to sidechain off of or else you won’t hear any audio when you turn the knob. The sidechaining starts out slight at first and grows as you turn the knob until all audio fades out. This is a great effect for mixing between songs or just giving your synths a little bit of life. I like to send all my kicks and snares to a special audio track and I sidechain off of that. Its all about the Sidechain!

“Reverb”, I shouldn’t really have to explain this one too much. Its just a simple reverb knob that goes from dry to wet. As you turn it the wetter it gets i.e. more reverberation.

“Cheap Radio" is another effect that i found online. It gives you that classic sound as if your listening through a radio or tin can. Essentially its an EQ8 that cuts out the Highs and the Lows leaving you with the middle spectrum.

“Fade to Gray" is the must have effect for anyone doing anything! No credit to me because I stole this one from Will.Marshall.me again.(well I paid for his template so its not stealing) This is basically an EQ8 and a PingPong Delay. As you turn it the delay increases as well as the frequencies that are cut out by the EQ, resulting and an awesome fading echoing effect thats perfect for fading out of tracks.

“Beat Accent" is just a gater thats not sidechained but instead its quantized to the global BPM. It works a lot like the "Drums Gate" but doesn’t require and drums to play. It starts out as a subtle slow gate and increases as you turn it. Great for drum tracks or just to get a little motion from stagnant tracks and loops. Try using the effect and then sending the audio to a send track with reverb on it.