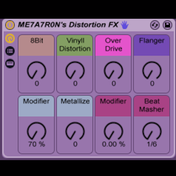 Originally posted on my blog at: http://me7a7r0n.tumblr.com/

This rack is a great rack for getting a dirty, distorted, crunchy effect out of any sound or track. I call it “ME7A7R0N’s Distortion FX"

We start off with the “8Bit" effect. Its your classic 8 bit reduction. As you turn it up the reduction loses bits, making it lower resolution, and the sample rate goes up. This gives you a really dirty LoFi feel and provides that video game 8 bit crunch! Try using it very subtly as its effects change drastically quickly.

“Vinyl Distortion" Isn’t exactly what it sounds like, but i used the audio effect "Vinyl Distortion" so thats what I named it. To be perfectly honest I had never used this audio effect in Ableton until I created this rack. I was messing around with a few effects I am less familiar with and this one really caught my ear. I used mapping to get a lot of movement out of this one knob. Id describe its effect as being sort of a high pass filter with a distortion effect to it. I don’t know if thats what vinyl distortion sounds like but this sure sounds cool!

“Over Drive" is an amplifier/gain that really punches your track up a bit. It has a real dirty, grainy sound and has a lowpass filter that kicks in at the peak of the overdrive to smooth it out. This thing is super simple but combined with some of the other effect in this rack it really comes to life.

Then we have the “Flanger”, another classic. Its your basic flanger that increases in strength and rate as you turn it up. I mapped it so that it doesn’t get too out of hand as I like my flanger to be subtle.

Lets skip the “Modifier" for now and jump straight into "Metallize”. “Metallize" gives you a very metallic, tinny sound. This is a very strong effect so use in moderation. The first "Modifier" affects the feedback on the "Metallize" and creates a more of an echoey sound. This is another effect that I didn’t create. Not sure if it came from Will Marshall or AfroDjMAc or somewhere else. I take no credit.

Last but certainly not least we have the “Beat Masher" and its "Modifier”. The “Beat Masher" is just a beat repeat where the beat repeat grid changes from 1/6, 1/8, 1/12, 1/16, 1/24, 1/32 as you turn it up. This will give you a nice repeating effect that plays on top of the audio playing. Perfect for drum tracks to mix up static drums or throwing it on a synth to get a glitchy repeat effect. The "Modifier" knob affects the pitch decay on the repeats.