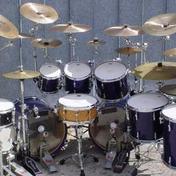 Follow the comments in the description, read the more detailed user guide and description on my site and listen to the audioclip/watch the Youtube demonstration video and you shouldn't have any problems with this ReFill.

To avoid all the problems with manually drawn drum tracks when putting a rock or metal song together, I have sampled some isolated drum tracks and made .wav, .REX and .MIDI files from them.

The original BPM is included in the patch titles. Don't stray too far from these (particularly the more metal loops) and they will all play back without distorting. Drop the BPM too low and you might not like what you hear!

To play different loops in sequence using the Reason sequencer you may have to drag the loops around very slightly on some of the the thrashier tracks. Other than that they should play fine.

I have used noise gating to strip as much mic bleed and studio reverb as possible from the loops, leaving you with dry samples. If you start adding a lot of effects back on the mic bleed will become a touch more noticeable, but nothing you can't cover up recording a rock or metal song.

The demonstration video can be found here.

A user guide and more tutorials can be found here.

The first link is for a Reason ReFill, the second a general DAW download where the clips are all just in a folder. Both will work in Reason.

If you have any problems, feedback or requests then post a comment on the link site and I will do my best to help you.

I'm eager to discover this path of the air that goes over the wood!