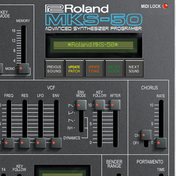 So here is my MKS-50 Advanced Synthesizer Programmer. Basically and upgrade of the Layzer’s very well done pg-300. Originally I was just going to add the ability to receive the current patch settings. However I ended up basically recreating the whole thing and adding a lot of other features.

So basically what this adds is

A few notes: There doesn’t seem to be any way to make the Synth send parameters via a midi command. The only way to do it is to push the tone or patch button twice or change the tone patch using the physical Synth buttons. (If someone can figure out a midi command to do it I will gladly change this). At the present the best way is to double click on the Tone button (manual pg. 11). I say Tone button because the Patch button doesn’t send the tone parameters, however the tone sends both tone/patch. Because there is no midi command when you change to patch/tones via the controller’s Next/Previous buttons you won’t see any of the controls on the Ctrlr panel change until you physically push the buttons on the Synth. (Thanks Roland!)

Also I didn’t include the patch or Tone number id because the transmission of this information was not consistent between tone and patch. So since it ended up being wrong a lot of the time in testing I decided not to include it. (Again blame Roland…)

As for as changing the Chord Mode I decided not to make that a part of this controller. Frankly I believe the selections that are included with the Synth pretty much cover what you would want to use anyway. You can still make change via the Synth’s button panel (see manual), and you can also “select” a chord mode via the controller slider.

If you want the mono mode to work correctly via this controller you should keep to the default setting on chord mode 1 which uses all the 6 voices for one note. The reason I did this is because I found that for at least my MKS-50 the monophonic mode didn’t work very well and would cut off at times. The unison mode didn’t seem to have this problem and it worked better with Portamento as well.

If you want to save your sound I recommend transmitting the patch (Update Patch button) then saving, then transmitting the tone (Update Tone button) and saving. Make sure you turn Memory Protection off (via page 36 of the manual).

Finally the MIDI LOCK button will stop the controller from reacting to transmitted midi. I did this in case you create a sound you like but need to find a slot to save it in. With Midi Lock off you can search your tones and patches and the select action won’t overwrite your current Ctrlr panels settings.

Please post a comment here or in this thread if you find any errors or suggestions. By the way I use OS X Lion for my music so I can’t verify that everything works the same via Windows. Hopefully. For the time being I have moved over to the Kawai K3 panel.

Note the font I used for the LCD Label was LCD-Dot.

A fantastic CTRLR panel for the Alpha Juno-1 or -2 series keyboards as well. Love it love it love it. Thank you.

This rocks! Another happy ?-2 user here. Thanks for this great working panel!

This rocks! Another happy AJ-2 user here. Thanks for this great working panel!

Hi Is this program good on Mac OsX? thanks

posted 7 years and 2 days ago

Have followed rue steps and still can't get ctrl to receive tone and patch changes. Yet it controls the parameters of the synth fine. Any ideas as to what I'm doing wrong? Cheers

I understand that I can save a snapshot of the momentary position of all sliders etc and I wonder if it's possible to save these snapshots like presets (in the computer).
Like this I wouldn't have to store them all in the MKS-50.

I second that having a possibility to save presents to computer will be so useful! Is it technically possible?

I have a couple of issues using this in Ableton 9.1.7:
at one load it showed me the patch names and env graphic. then it stopped doing that and at the same time stopped showing the gui placement of the control values on patch change.

second: how do you get the ctrlr vst host to stop showing a frowny face on the midi device selection in each of the three midi section while as a vst plugin? I had to get a separate usb midi interface and not use it directly in ableton but use it in the ctrlr vst only.


I think I discovered a trick: I set Abletons vst device for ctrlr in the configure mode prior to loading the panel in the vst, and it populates all of the 43 something controls you can automate in the ableton. nifty, I think.

thank you in advance.

A quality piece of work! This is truly an amazing interface. It makes an already classic synth even better. For those of us who don't have a KIWI PE or a PG-300 hardware programmer, it's an awesome gift. Thanks so much for creating and supporting this!!!

Hello , thx for this one and sorry for my bad english ;) .. i would love to control this one with midi CC in logic pro X , for automate filter or other things ... is it possible ?? thx

I'm having some trouble getting this to work properly in Ableton 9.5 on OSX, but standalone mode is working with my Alpha Juno 1.

In the standalone version of ctrlr, if I change a patch on the synth by pressing one of the membrane buttons, the ctrlr panel receives the patch settings, name of the patch, etc. However, I can't get either the VST or AU plugin to behave the same way. It won't receive patches from the synth and I'm not seeing anything in the output section of the MIDI monitor. In both the plugin and standalone versions, moving the controls on the panel's GUI will properly send sysex in realtime to the synth.

I've pasted the data from the MIDI monitors . Any help would be greatly appreciated!

posted 3 years and 11 months ago

Great Panel, works nicely for me with the Juno 2. Only thing I cannot get working is how to send the the complete tone parameters from the Juno 2. This seems to be somewhat different from MKS50. The notes above say I need to press the tone button twice, but I cannot find a tone button on the Juno 2. Am I missing something?