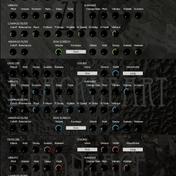 I need the bullets for this gun. The humans are coming, and I want that treasure.

Part violin family, part machine. The three String Cyborgs - Zinc, Blackheart and Ironface - use the processed and looped sounds of bowed strings (cello and double bass) as oscillators, and place them in a synthesizer architecture with unison, detune, filters and even some humanization parameters. Hide your humans.

They are named after the three Roms from Albert Pyun's movie Omega Doom - vicious, very advanced and even more fashionable killer droids. The sound (we like to think it's a very advanced and even more fashionable killer sound) is basically a very organic version of a virtual analog synthesizer. They are capable of many kinds of basses, from plucks to wobbles, as well as drones, pads, organs, evolving textures, various kinds of leads and of course string sounds. There is even a closed hi-hat preset.

Don't confuse me with logic.

What is this, your intuition?

Some of the controls - AHDSR envelope, resonant high-pass and low-pass filters - are classic analog synthesizer territory. There is also vibrato and low-pass filter wobble with more parameters than just the basic speed and depth. There are up to five unison voices with adjustable detune and width.

The key to the sound is the voicing. Each cyborg is based on a set of bowed string samples which have been processed into loops with infinite sustain. There are long (more organic) and single-cycle (more synthetic) versions of the loops. The loops are played starting at a random point, and every unison voice is randomized differently, which makes the phase relationships between unison voices unpredictable. Also, rather than use different versions of the same note, the extra unison voices are created by shifting higher notes down, which makes the sound richer and thicker. There's also a humanization LFO, which can be used to add randomness to the vibrato, volume, and other parameters. Its phase is set to a different random value for each unison voice, which can make for very long and evolving textures, as the different voices' vibratos and wobbles drift out of sync. All in all, these are either very organic-sounding synthesizers or really synthy sounds made from real instruments.

Each of the three is somewhat different. Zinc is made from samples of a double bass being bowed hard with a lot of rosin on the bow, has a larger number of source samples which gives the additional ability to select how far the extra unison voices are shifted, and also includes a four-voice noise oscillator made from bow screech samples. Blackheart originated as samples of a cello, has a higher range, and includes a three-voice noise oscillator created by filtering some notes so that only unpitched screech remained. Ironface is made from quieter and warmer double bass samples, and instead of a noise oscillator includes a blendable set of distorted samples.

Drones like this bartender are basically weak. They're always thinking that someone good like you is gonna come save them from someone bad like me. Except I'm pretty much pure evil. I want all drones to know - good just doesn't exist anymore. That's my mission in life.

This demo shows off the string, drone and pad sounds that the String Cyborgs excel at. Drums are from other sources.

Here is a track which uses all three String Cyborgs as basses - the plucked bass is Zinc and Blackheart, the wobbly sustained bass is Zinc, Ironface and a synthesized sine wave during the chorus. A third instance of Zinc is used to play only one swishy note at the very end.

Who's left to kill, anyway? We don't even know the humans exist.