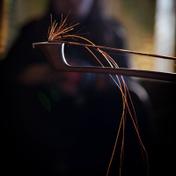 One huge solid stick of mahogany, four long and thick strings, a piezo pickup and not much more - that's the Ergo electric upright bass we sampled. Though across its natural range the instrument is mainly a portable substitute for the acoustic double bass and the advantage of portability disappears when using samples, its simplicity and solid construction allow it to produce stable notes when tuned extremely low. Both arco (bowed) and pizzicato (plucked) articulations are included. Arco has four velocity layers and two to four round robins per note, pizz has three velocity layers and three-four round robins. The lowest notes sampled for both are E an entire E below the E on a standard-tuned bass. Though it's easy to create frequencies that low with synthesis or by slowing down or pitch-shifting higher-frequency samples, samples of strings or any other physical objects actually vibrating at notes this low are rare.

Sure, it can be used as a bass. The lowest notes are huge, and also useful for constructing enormous cinematic drones and thuds. They're also great for running through all sorts of effects. The possibilities are enormous - we are offering this download less as an instrument to be used as is and more as source material for creating your own sounds.

As an example of what these samples could be turned into, we have included a pack of string kicks or tuned kick drums made from some of the lower notes sampled. They are filthy and rattle around in a very organic way, but are much closer in character to classic electronic kicks than to acoustic kick drums. 34 kicks are included, made from both plucked and bowed notes using nothing more than simple volume envelopes, low-pass filters and sometimes timestretching in order to keep the natural attack of the string sounding natural. Since some were made from samples of the string tuned to E or F#, they also come in extra variations retuned to C or A so they'll work well in songs in those more common keys.