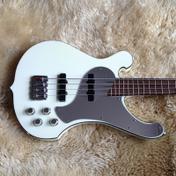 The Fashionbass is more of a general-purpose bass guitar library than Karoryfer's other basses. Underneath the odd shape which is a bit like a Rick bass that's been flipped upside down and redrawn by a fashion designer, and the big mirror pickguard, it's pretty much a typical Jazz bass - 34" scale, alder body, maple neck, rosewood fingerboard, and two passive pickups. The strings are a pretty typical set of roundwounds, too. You do get more range than with a typical Jazz, though, as this bass has 24 frets and is tuned CGDA, an octave below cello, with the C string also sampled tuned down to A and F#.

The notes are sampled every minor third with five velocity layers and three random round robins. There are also release samples (every minor third with four round robins) and percussive and fingering noises (five round robins). All together that makes 426 24-bit 44.1 kHz wav samples and a 301 MB download. Four different SFZ mappings are included - the regular mapping which is the most realistic, one without release samples, a three-voice unison mapping with all the round robins playing at once, and a shifty five-voice unison mappings which uses higher samples pitched down to create the extra voices. The samples can be used with Plogue Sforzando and should also work with other SFZ-compatible samplers.

As usual the bass was recorded direct with the onboard EQ set flat and no compression or any other effects, and not processed with anything except for noise reduction. So, there's no pre-baked effects or coloration and you have full control of what you want to do to the sound, which is brighter than the more thumpy Swagbass. If you remove the brightness with EQ or a low-pass filter and add heavy compression you can get a great hip-hop sound, or leave the brightness in and use an amp simulator for a nicely realistic bass guitar sound for funk, country etc.

The below track uses Fashionbass as the main bass sound, as well as Shinyguitar, Emilyguitar, Blackheart and the Karoryfer x bigcat cello.