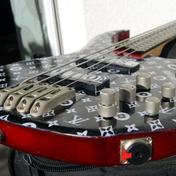 The world's most swagged-out bass sample library. A bold claim, but D. Smolken didn't just record, edit and map these samples - before he did any of that he also glued fake Louis Vuitton fabric to the bass. Underneath that is an uncommon combination of modern active electronics, a long scale, and a 10-year-old set of dead flatwound strings. That makes this a great bass for hip-hop, pop and R&B, especially combined with low tuning - CGDA, an octave below cello, but the low C string is also sampled tuned down to A. The notes are sampled every minor third across a range of four octaves with three velocity layers and four round robins. There are also string muting noises triggered on key release (sampled every minor third with three round robins) and various percussive noises (with a clearly excessive five round robins). All that adds up to 331 24-bit samples in wav format.

The bass was recorded direct with the onboard EQ set flat and no compression or any other effects, and not processed with anything except for noise reduction. So, there's no pre-baked effects or coloration and you have full control of what you want to do to the sound. We'd usually roll off some treble with EQ or even a lowpass filter, and then add compression, but the choice is yours.The samples can be used with Plogue Sforzando and probably also with other SFZ-compatible samplers. In addition to the basic mapping there are four others which sacrifice various degrees of realism for an unrealistically nice sound. Clean - no release noise samples. Shiny - no release samples and using only open-string samples for the bottom two octaves. Clean things - no release samples, all round robins samples play at once spread around in stereo. Shiny things - no release samples, all open strings in the bottom two octaves, all round robins at once.

Here is a track which uses Swagbass as the bass during the verses, and for bass fills during the chorus. String Cyborgs, Cowsynth, Weresax, Shinyguitar, Nathan Sheeran drums and cello libraries also make appearances.