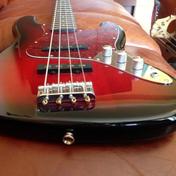 We've released several bass libraries already, but this bass was played by someone who is the complete opposite of our usual bass sample guy. She not only has very good hair, but also actually listens to music that has bassists playing basses. These samples are not polite and have a ton of character. The strings get plucked hard and rattle against the frets. The bass (a Squier Jazz) is a classic design and the tuning is standard, so this is our best library for an archetypal bass guitar sound which could never be mistaken for anything else.

The sustained notes have four round robins and four velocity layers. Even the quietest layer is not all that gentle and the loudest layer, though plucked with the fingers, is so hard it sounds almost like slap. The staccato notes are plucked even harder, with only one vicious velocity layer and five round robins, and their endings are also used for the release samples. Everything is sampled every minor third, with the low string also sampled tuned down to C#. Finally, there are some pick scrapes with four round robins. All together that makes 310 24-bit 44.1 kHz wav samples and a 159 MB download.

SFZ mappings are included. They should work with most SFZ-compatible samplers, but we've tested them with Plogue Sforzando so we recommend using that. There are seven mappings, including three where we just had fun throwing realism out the window.

Angry: both sustained and staccato notes at once, plus release samples

Excessive: all sustained and staccato round robins at once for a total of nine voices

Shifty: three voices spread in stereo, with two of them created by shifting higher samples down

The recordings are direct with both pickups on and all knobs on 10, and not processed with anything except for noise reduction. So, they'll work best with an amp simulator to complete a classic bass guitar sound. The first half of the below demo uses the dirty mapping with free amp sim and channel strip plugins, and the second half is the shifty mapping with a basic low-pass filter sweep, reverb and compression for a more synthlike sound.

The below track uses Growlybass for the bass part during the verses, and also uses several of our other libraries: Emilyguitar, Shinyguitar, Pastabass, Blackheart, Cowsynth and the cello.