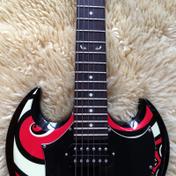 After a few bass libraries, we've gone for a guitar. There are a lot of guitar samples out there intended for lots of styles of music guitarists like, from Latin jazz to metalcore, but this library is for music guitarists really hate, from hip-hop to EDM. It's designed to be easy to use for producers who don't necessarily know a lot about guitars and don't need a whole lot of different articulations, control over left-hand position, note off groups etc. Instead of all that you get a fat, percussive sound that's great for crisp rhythms.

The guitar sampled is an Epiphone Emily the Strange model strung with thick flatwounds strings. It's basically an inexpensive SG, but a really cute one. Sure, cute looks might not matter all that much when it comes to samples, but being shallow is fun. The notes are sampled every minor third with four velocity layers and three random round robins. There are also release samples (every minor third with four round robins) and various noises (with five round robins). All together that makes 323 24-bit 44.1 kHz wav samples and a 98 MB download.

SFZ mappings are included. They should work with most SFZ-compatible samplers, but we've tested them with Plogue Sforzando so we recommend using that. Although we tried to keep things simple and convenient, you will have to decide which of the six mappings you want to choose from.

•Basic: The most realistic mapping using all the samples.

•Clean: No string muting noise at the end of each note. Cleaner but a little too clean to sound real.

•Three voice: Three unison voices spread in stereo, but at the cost of having no round robins. This is kind of like having three tracks of guitar overdubbed with unrealistic, robotic precision.

•Five voice: Five unison voices with four of them created by shifting higher note samples down to the pitch being played. The effect is a thicker, more detuned sound than the three voice mapping. This mapping does have round robins for a more organic feel, but as something must be sacrificed in order to create five voices, you give up some of the upper range.

•Wide chords: Just for the hell of it, this is the above mapping with the voices spread out in stereo, with the lower strings in the middle and the higher strings outside. A total abuse of the ability to map samples in completely unrealistic ways, but kinda neat.

The recordings are direct with both pickups on and all knobs on 10, and not processed with anything except for noise reduction. So, the samples should probably be run through an amp simulator or some other effects most of the time. The "Habanera" demo uses the basic mapping and both tracks are run through simple free amp sims and a free reverb. The "Toreador" demo uses no effects or processing whatsoever, it's the raw sound of the samples in the basic, three voice, and five voice mappings, with the last one also doubled an octave above towards the end.

The below track Emilyguitar, Shinyguitar and several of our other libraries. Emilyguitar is the main guitar part using the five-voice mapping run through the Ace amp sim.

[Couldn't fetch content for https://www.youtube.com/watch?v=8bkuyAGxNyc - Is the URL correct?]